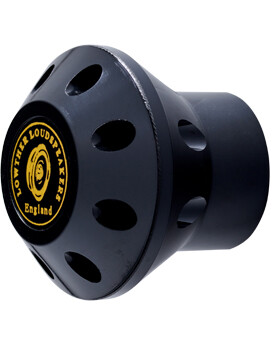 As everyone who is aware of Lowther Loudspeakers knows, for more than half a century every drive unit they manufactured has incorporated a Phasing Stabilizer. The main function of the standard stabilizer is to reduce the interference caused by opposite sides of the inner cone cancelling out sound waves at certain frequencies. The function of the full stabilizer, in addition to reducing sound wave cancellations, is to act as a diffuser to guide the sound waves to the walls of a horn fitted to the front of a drive unit.

The Phase Equalizer not only better achieves all that the originals can, but it also accomplishes so very much more.

The Phase Equalizer forms a horn contour between itself and the wall of the inner cone. This allows the high-frequency response to be much improved. For the same reason, the higher mid-range response is also greatly improved. The reproduced sound is cleaner and clearer with much better separation of musical instruments.

The series of tubes are of a precise size, number and depth in order to maintain equal pressure either side of the cone assembly throughout the complete audible frequency range. Without some stabilizing device, pressures either side of the diaphragm assembly become increasingly unequal the lower the sound frequency to be reproduced. By fitting the new Phase Equalizer the pressure both sides of the cone are equalized throughout the complete audible frequency range. The control applied to the diaphragm eliminates the possibility of overextended oscillations when the cones are moving forward. The effect is similar to fitting a forward radiating horn but without the possible distortion and colouration that such horns may develop.

Originally the Phase Equalizer was designed to balance the pressure from either side of the diaphragm assembly of the Lowther DX4 Module. (The DX4M is now superseded by the EX series drive units.) The acoustic chamber fitted to the rear of these drive units requires that a compensating device be fitted to equalize the pressure. The Phase Equalizer is fitted as standard to the EX series of drive units and to the DX4 and DX65 and is now available as an optional extra for all new Lowther drive units. In addition, we are making it available to all existing Lowther users. The Phase Equalizer may be fitted to all types of Lowther drivers irrespective of age. No modifications are necessary. It is a simple task to unscrew the original stabilizer and refit the new one. Then an entirely new level of listening pleasure will be experienced.

Save this product for later
Display prices in: GBP